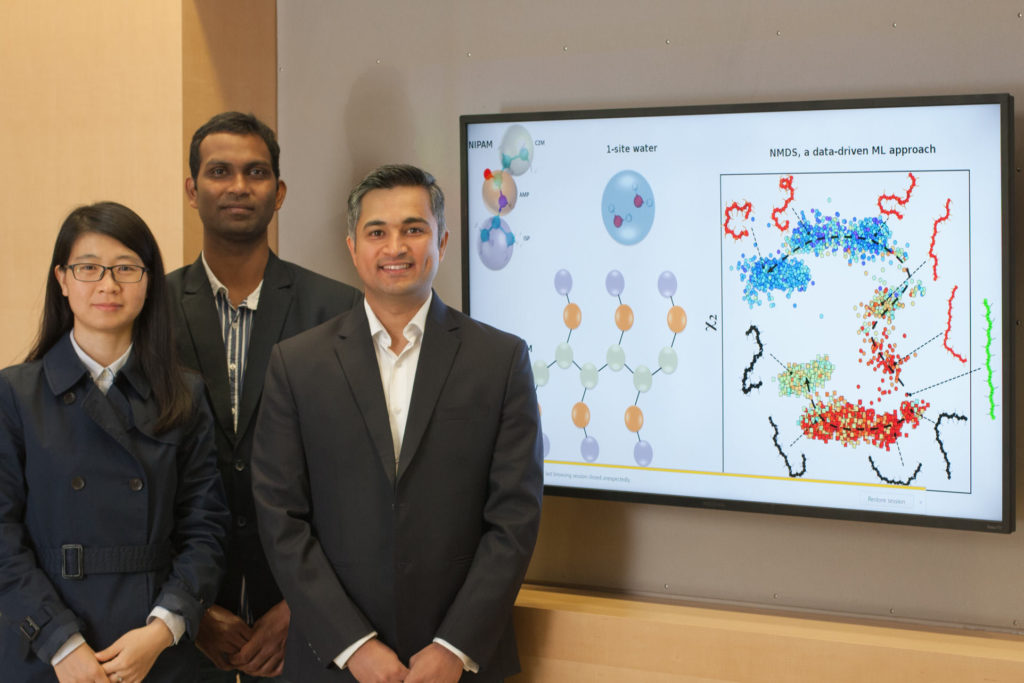 A team of researchers has developed a method to investigate the structures of polymers that are sensitive to external stimuli. Left to right, Yaxin An, Karteek Bejagam, and Sanket Deshmukh. Polymers—molecules of repeating chemicals—are the basis of many materials: plastic water bottles, rubber tires, even the keratin in your hair. When certain kinds of polymers are sensitive to changes in external stimuli such as temperature, they become helpful, particularly in biomedical applications like drug delivery, tissue engineering, and gene delivery.

A team of researchers led by Sanket Deshmukh, assistant professor of chemical engineering, has developed a method to investigate the structures of polymers that are sensitive to external stimuli. In a recently published journal article in the Journal of Physical Chemistry Letters, the group developed a first-of-its-kind, temperature-independent computational model for one particular polymer that is sensitive to temperature. Simulation trajectories of this computational model were analyzed by using a data-driven machine-learning method.

A type of computational model Deshmukh’s team has developed for the thermosensitive polymer is called a coarse-grained model, where a group of atoms is arranged together in the model in what’s known as a bead. Moreover, this is a first-ever attempt to utilize a specific data-driven machine-learning approach, called a non-metric multidimensional scaling method, to analyze molecular dynamics simulation trajectories of a coarse-grained model of a temperature-sensitive polymer.

« This analysis shows the presence of multiple metastable states of PNIPAM during its conformational transition above the lower critical solution temperature, which provides entirely new insights on this process, » Deshmukh said.

« We know the model works, because it held up even under varying conditions, » said Yaxin An, a third year Ph.D. student in Deshmukh’s group. « It’s fantastic to see the behavior as expected both on the computer and in reality. »

« This new coarse-grained model of PNIPAM was built such that it can retain the taciticity of PNIPAM and hence can capture effects observed in laboratory experiments, » said Samrendra Singh, a visiting scholar in Deshmukh’s group.

This research used the Cori supercomputer at the Department of Energy’s National Energy Research Scientific Computing Center to develop these models. The extensive validation of the model was done at Advanced Research Computing at Virginia Tech.

At present, Deshmukh’s group is utilizing the model of the thermosensitive polymer to simulate complex architectures with the goal of providing insights on the structures on individual polymer chains present in these materials, which are otherwise inaccessible even with the existing advancements in the experimental techniques.