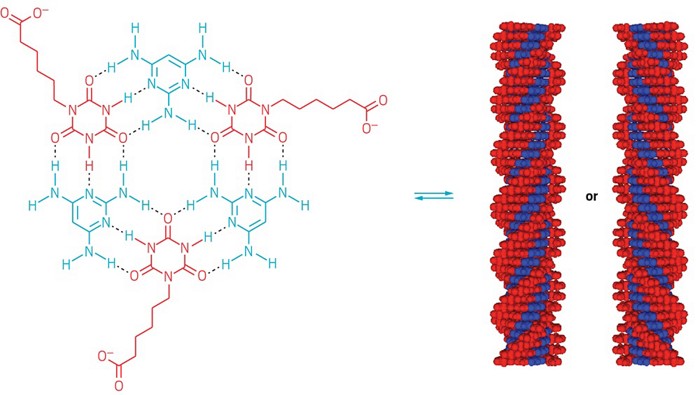 Findings suggest a path that prebiotic chemistry could have followed to reach homochirality seen in biology today. How the molecules of life came to adopt a particular handedness is an enduring mystery—one that chemists may never completely solve. Nicholas V. Hud and coworkers at the Georgia Institute of Technology now show that such homochirality can arise in a system made of achiral molecules that may have been prebiotic versions of modern nucleic acids (Angew. Chem., Int. Ed. 2018, DOI: 10.1002/anie.201812808).

These molecules—2,4,6-triaminopyrimidine and cyanuric acid with a hexanoic acid tail—self-assemble in water to form hexameric rosettes that stack on top of each other in supramolecular polymers. Postdoc Suneesh Karunakaran and grad student Brian Cafferty decided to acquire circular dichroism (CD) spectra of the material to determine the material’s chirality. Even though the components are achiral, the resulting supramolecular material had strong CD signals indicating it contained chiral helices. The signals disappeared when the material was heated and reappeared upon cooling—sometimes with reversed handedness and different intensities.

Hud thought that might mean the material could have coexisting domains with different helical handedness. But he didn’t know how big the domains were. To find out, his team built an instrument for scanning and measuring the CD spectrum of a sample with about 0.5-mm spatial resolution. “Out popped an image where there were domains with positive CD signals and domains with negative CD signals,” Hud says. Positive and negative CD signals indicate different chiralities. “It gave us one of the first direct measurements showing the separation of these assemblies into chiral domains.”

The researchers also showed that they could make the system favor one handedness over the other by including as little as 0.1% of a chiral cyanuric acid derivative with the achiral monomers. Such seeding of a system’s chirality is what chemists call a “sergeants and soldiers” amplification.

“The inclusion of just 0.1% of a chiral cyanuric acid building block completely dictates the chirality of the whole assembled sample,” says Ignacio Alfonso, a supramolecular chemist at the Institute of Advanced Chemistry of Catalonia. “This is the world-record for a sergeant-and-soldiers chiral amplification in supramolecular structures.”

The work is an “elegant example of how a chiral trace can be amplified to produce highly enantioenriched supramolecular structures,” says Jevgenij Raskatov, a supramolecular chemist at the University of California, Santa Cruz. “Phenomena like the one described in the paper very well may have contributed to the symmetry breaking that resulted in the chirality of biomatter that we know today.”