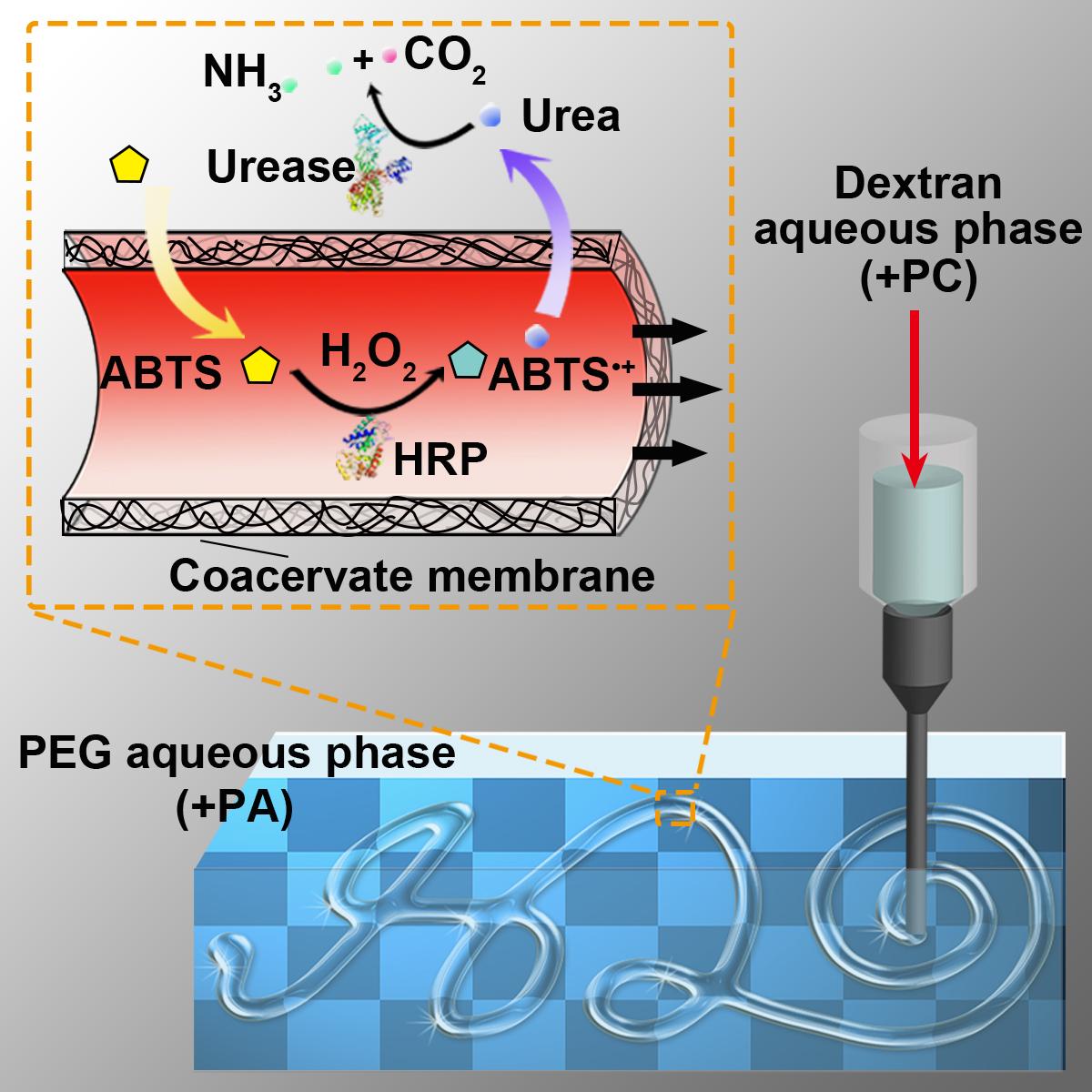 Polymer chemists and materials scientists have achieved some notable advances that mimic nature, but one of the most common and practical features of cells has so far been out of reach – intracellular compartmentalization. It refers to the way many different organelles, vesicles and other “water-in-water” soft structures in the cell, contain and isolate chemical reactions and processes. It also lets reaction products be selectively shared with end users inside the cell.

Now a research team led by Thomas Russell at the University of Massachusetts Amherst and the Lawrence Berkeley National Laboratory, with postdoctoral researcher Ganhua Xie and others, describe in a new paper how they take advantage of differences in electrical charge to create an “all aqueous,” water-in-water construct that achieves compartmentalization in a synthetic system.

“Our results point to new opportunities for manipulating and improving continuous separation and compartmentalized reactions. I feel we have developed a strategy to mimic the behavior of living cells,” Russell notes. “People have tried before to build synthetic systems that mimic nature and haven’t done it, but we have. I think this is the first time this has been demonstrated.” Details appear in the current issue of Chem.

Evan Runnerstrom, program manager in materials design at the Army Research Office, which supported this work with the U.S. Department of Energy, says, “This ability to program stable structure and chemical functionality in all-aqueous systems that are environmentally friendly and bio-compatible will potentially provide unprecedented future capabilities for the Army. The knowledge generated by this project could be applicable to future technologies for all-liquid batteries, water purification or wound treatment and drug delivery in the field.”

Russell and colleagues have been interested in liquid interfaces for several years and earlier conducted many oil-and-water experiments to observe results under various conditions. “This led us to start looking at water-in-water liquid interfaces,” he notes.

For this work, Xie used two polymer aqueous solutions, one of polyethylene glycol (PEG) and water, the other dextran and water, with different electrical charges; they can be combined but do not mix. It’s a “classic example” of coacervation, they suggest – the solution undergoes liquid-liquid phase separation and forms two separate domains, like the non-mixing wax-and-water in a lava lamp.

Next, Xie used a needle to send a high velocity jet of the dextran-plus-water solution into the PEG-plus-water solution, something Russell calls “3D printing water-in-water.” This operation creates a coacervate-membrane-stabilized aqueous or water-filled tubule where the path-length of the tube can be kilometers long, he says. This 3D water-on-water printing forms a membranous layer of a coacervate that separates the two solutions.

Another feature of the water tube formed this way is that electrical charge regulates whether and in which direction a material can pass through the coacervate membrane, the authors explain. A negatively charged dye or other molecule can only pass through a negatively charged wall of the asymmetrical membrane, and likewise for positively charged materials. Xie says, “It effectively forms a diode, a one-sided gate. We can do a reaction inside this tube or sac that will generate a positively charged molecule that can only diffuse into the positive phase through the coacervate.”

He adds, “If we design the system right, we can separate things out easily by charge, so it can be used for separations media in all-aqueous compartmentalized reaction systems. We can also trigger one reaction that will allow a coordinated reaction cascade, just as it happens in our bodies.”

Xie explains that the 3D water-on-water printing allows them to direct where they put these domains. “We can build multi-layered structures with positive/negative/positive layers. We can use the sac-shaped ones as reaction chambers,” he says. Advantages of separating functions and materials in cells by compartmentalization include allowing many processes to occur at once, many different chemical environments to coexist and otherwise incompatible components to work side by side.

Among other tests and experiments, the researchers report on how they designed an all-aqueous tubular system and attached needles and syringe pumps at each end to allow water to pump through the entire structure without leakage, creating a flow-through coordinated reaction system.

“Once we’d done it, we looked at the biological mimicry”, Russell says. “There have been lots of efforts to mimic biological systems, and a biologist might object and say this is too simple. But I do think that even though it involves simple materials, it works. It’s treading very close to vasculature, and it mimics any place where chemicals flow through a membrane. Is it in the body? No, but it does mimic a real metabolic process, a compartmental reaction.”