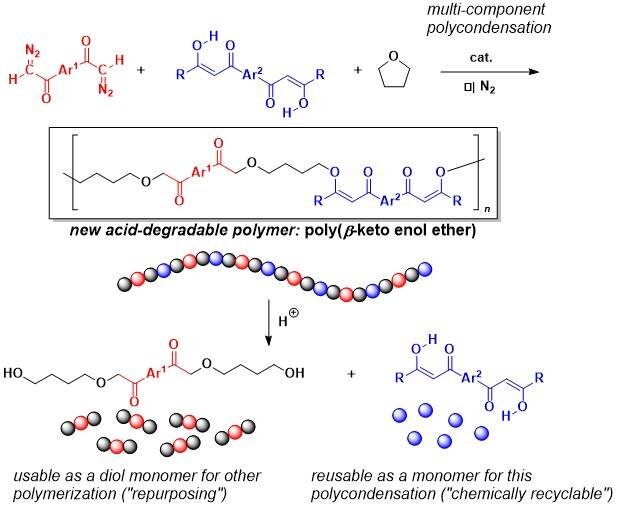 A research team in Ehime University prepared a new type of synthetic polymer, which can be degraded into a combination of well-defined low molecular weight compounds under very mild acidic conditions. The new polymer, poly(β-keto enol ether), has great potential to be utilized as an environmentally friendly material in the near future.

The research team, led by E. Ihara and H. Shimomoto, has been utilizing unique reactivities of a diazocarbonyl group for polymer synthesis where they have succeeded in preparing a variety of polymers with unprecedented chemical structures by the polymerization of some bis(diazocarbonyl) compounds bearing two diazocarbonyl groups in one molecule. Now they have found that three-component polymerization of an appropriated combination of a bis(diazocarbonyl) compound, bis(1,3-diketone), and tetrahydrofuran (THF) as monomers yields a new type of polymer structure containing the β-keto enol ether framework in the main chain, which has been known to be readily cleaved with a small amount of acid.

The polymerization catalyzed by a Rh catalyst proceeded as they expected, affording poly(β-keto enol ether) with a molecular weight higher than 10000. More importantly, the polymer was found to be cleanly degraded into a combination of two low molecular weight compounds in high yield under mild acidic conditions; one of the degraded products was the monomer itself, bis(1,3-diketone) (indicating recyclability of the monomer), and the other one was a dihydroxy compound derived from the bis (diazocarbonyl) compound and THF used as other monomers.

The acid-sensitivity of the β-keto enol ether framework of the polymer was so high that the degradation proceeded even in a chloroform solution because the solvent usually contains a very small amount of acid spontaneously generated from the solvent molecule under an ambient condition. On the other hand, in other solvents without an acidic trace, such as dimethylsulfoxide, the polymer did not degrade at all, demonstrating the extremely high sensitivity of the polymer structure to an acidic stimulus.

The highly acid-sensitive degradability can be useful for some important applications. For example, a drug-encapsulating material made of the polymer would release the incorporated active component by rapidly responding to a mild acidic environment. In addition, materials made of the polymer can be easily degraded to the above-described low molecular weight compounds, including one of the monomers, after they are used in neutral conditions. Synthetic polymers with such degradability are especially desired because of the serious environmental damage caused by non-degradable synthetic polymeric materials.