Polymer membranes facilitate the exchange of oxygen in the body 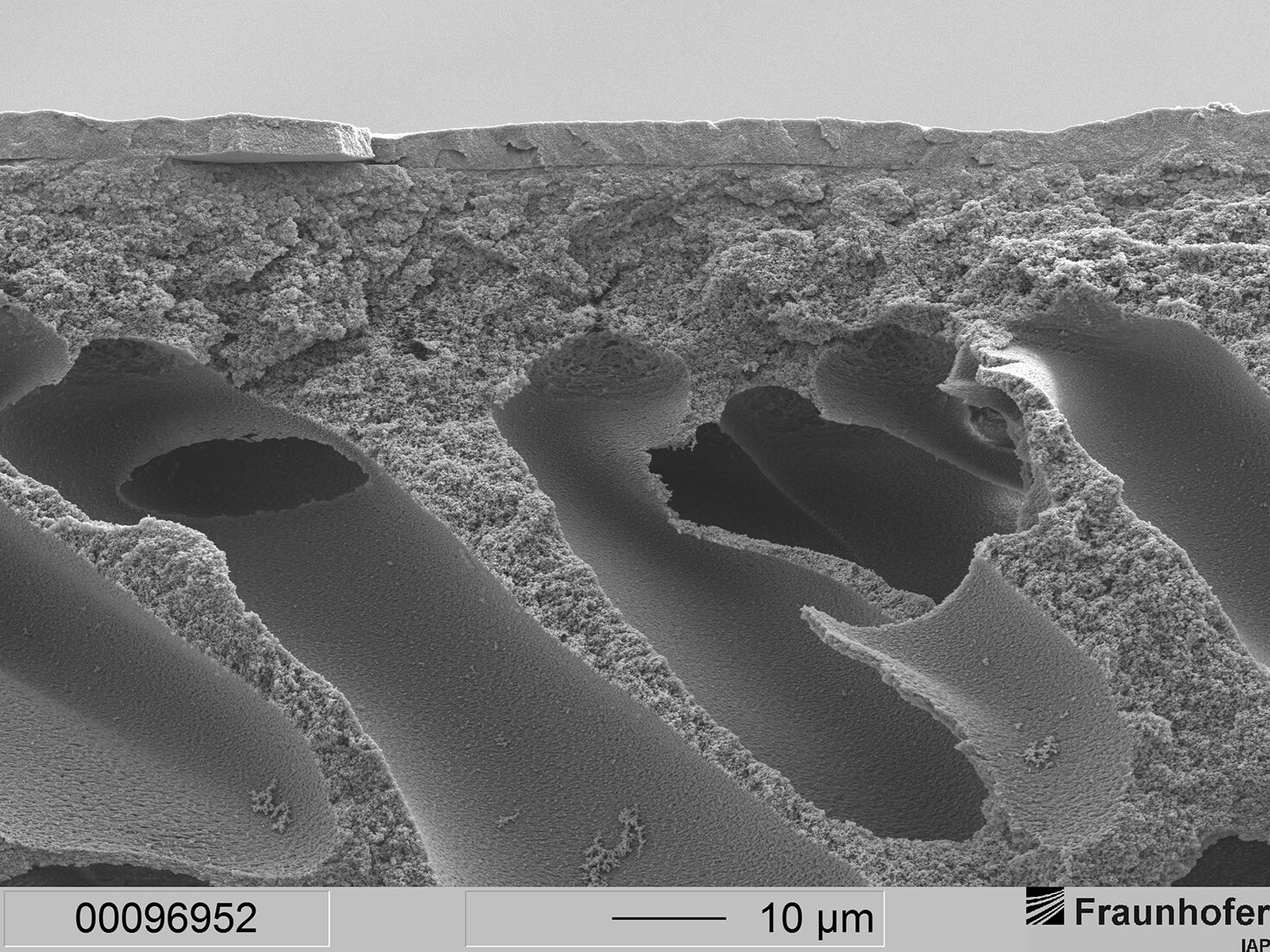 Acute respiratory distress syndrome requires immediate action. In an emergency situation like this, patients are often ventilated using a heart-lung machine. This involves circulating the blood outside the body, adding oxygen and removing carbon dioxide via membranes. A team of researchers at the Fraunhofer Institute for Applied Polymer Research IAP has developed a new kind of membrane structure that allows faster gas exchange in order to make the blood oxygenation easier on patients.

Severely ill lung patients who are suffering from acute respiratory distress syndrome are ventilated artificially using a medical apparatus—medical professionals refer to this procedure as extracorporeal membrane oxygenation (ECMO), an alternative to traditional machine respiration. It involves taking blood from the body via a tube, enriching the blood with oxygen and removing carbon dioxide outside the body using a membrane oxygenator, then reintroducing the blood back into the bloodstream via a second tube. This procedure is extremely demanding on patients and can only be carried out over a short period.

Researchers at Fraunhofer IAP in Potsdam have set themselves the goal of making this process gentler on patients. On behalf of the Austrian company CCORE Technology, they are developing membrane morphologies capable of intensifying the ventilation support. Commercial membranes have a symmetrical structure and are designed for slow oxygen exchange. « So we are devising asymmetrical structures with characteristics that permit much faster gas exchange than conventional membranes, » says Murat Tutuş, a researcher at Fraunhofer IAP. « Our USP is that we can manufacture a targeted membrane structure out of various polymers. »

Unlike symmetrical membranes, which are intrinsically homogeneous, asymmetrical membranes are distinguished by their heterogeneous, non-uniform porosity. Toward the separation layer, the structure is characterized by small cavities, beneath which there are large cavities that are open underneath. The gas is quickly transported by convection to the proximity of the separation layer via the large, open cavities, where it subsequently has to travel just a short distance slowly by diffusion to the separation layer via the small bubbles. After that, the gases cross over to the other medium through an ultrathin layer. « Our membranes have a structure tailored to the desired membrane material. Consequently, our membrane possesses exceptionally high gas permeability and high mechanical stability. On top of this, the membrane material is both inert and soft, just as it ideally should be for a material that comes into contact with blood, » explains the engineer.

The structure was initially implemented in flat membranes using the standard precipitation method to facilitate subsequent easy and cost-effective upscaling. To obtain the morphology they were looking for, the research team used both conventional and unconventional polymers and adjusted the process parameters accordingly. « Oxygen transport was quadrupled under the defined conditions. At the same time, the manufactured membranes had a pressure stability of at least 7 bar, but generally higher than 10 bar TMP (transmembrane pressure), » says Murat Tutuş.

As the next step, the researchers want to transform the blood oxygenation process from an extracorporeal into an intracorporeal one. This means miniaturizing the membrane made of hollow fibers to such an extent that it can be placed in the aorta, which has a diameter of around one centimeter. « The challenge consists in creating membrane morphologies that can ensure very high oxygen transport over a small surface, » says Murat Tutuş. As this is not achievable with flat membranes, the researcher and his team are adapting the structure to hollow-fiber membranes. To this end, the team is specially developing a hollow-fiber spinning machine at the institute in collaboration with their colleague Dr. André Lehmann. The machine is due to be commissioned in early 2020.

As the membrane morphologies can be adapted to specific requirements, the separation layers are also suitable for other medical applications, such as dialysis or determining blood sugar levels. But industrial uses are also conceivable—for example, the hollow-fiber membranes could be adapted for water purification or as air filters.