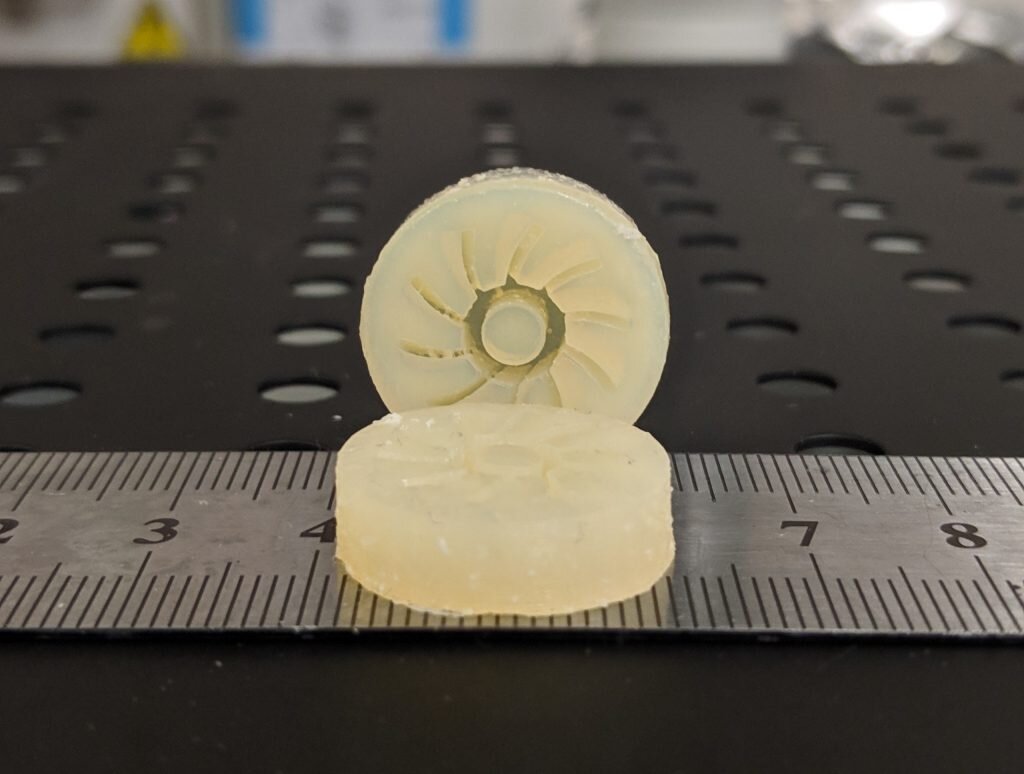 Virginia Tech researchers have discovered a novel process to 3-D print latex rubber, unlocking the ability to print a variety of elastic materials with complex geometric shapes. Latex, commonly known as the material in gloves or paint, refers to a group of polymers—long, repeating chains of molecules—coiled inside nanoparticles dispersed in water.

3-D printed latex and other similarly rubbery materials called elastomers could be used for a variety of applications, including soft robotics, medical devices, or shock absorbers.

3-D printed latex has been documented only a handful of times in scientific literature. None of the previous examples come close to the mechanical properties of the latex printed by an interdisciplinary team affiliated with the Macromolecules Innovation Institute (MII), the College of Science, and the College of Engineering.

Through novel innovations in both the chemistry and mechanical engineering disciplines, the team overcame some long-standing limitations of 3-D printing, also known as additive manufacturing. The researchers chemically modified liquid latexes to make them printable and built a custom 3-D printer with an embedded computer vision system to print accurate, high-resolution features of this high-performance material.

« This project represents the quintessential example of interdisciplinary research, » said Timothy Long, a professor of chemistry and a co-principal investigator on this project along with Christopher Williams, the L.S. Randolph Professor of mechanical engineering and interim director of MII. « Neither of our labs would be able to accomplish this without the other. »

This project is a joint collaboration between Virginia Tech and Michelin North America via a National Science Foundation award aligned with the Grant Opportunities for Academic Liaison with Industry program, which supports teamed research between academia and industry. Details of their initial results are detailed in a journal article published in ACS Applied Materials & Interfaces.

After unsuccessful attempts to synthesize a material that would provide the ideal molecular weight and mechanical properties, Phil Scott, a fifth-year macromolecular science and engineering student in the Long Research Group, turned to commercial liquid latexes.

The researchers ultimately wanted this material in a solid 3-D printed form, but Scott first needed to augment the chemical composition to allow it to print.

Scott ran into a fundamental challenge: liquid latex is extremely fragile and difficult for chemists to alter.

« Latexes are in a state of Zen, » said Viswanath Meenakshisundaram, a fifth-year mechanical engineering Ph.D. student in the Design, Research, and Education for Additive Manufacturing Systems Lab who collaborated with Scott. « If you add anything to it, it’ll completely lose its stability and crash out. »

Then, the chemists came up with a new idea: What if Scott built a scaffold, similar to those used in building construction, around the latex particles to hold them in place? This way, the latex could maintain its great structure, and Scott could add photoinitiators and other compounds to the latex to enable 3-D printing with ultraviolet (UV) light.

« When designing the scaffold, the biggest thing you have to worry about is stability of everything, » Scott said. « It took a lot of reading, even stuff as basic as learning why colloids are stable and how colloidal stability works, but it was a really fun challenge. »

While Scott tinkered with the liquid latex, Meenakshisundaram had to figure out how to correctly print the resin. The researchers chose to use a process called vat photopolymerization, in which the printer uses UV light to cure, or harden, a viscous resin into a specific shape.

Even with the custom printer, the fluid latex particles caused scattering outside of the projected UV light on the latex resin surface, which resulted in printing inaccurate parts, so Meenakshisundaram devised a second novel idea. He embedded a camera onto the printer to capture an image of each vat of latex resin. With his custom algorithm, the machine is able to « see » the UV light’s interaction on the resin surface and then automatically adjust the printing parameters to correct for the resin scattering to cure just the intended shape.

« The large-area scanning printer was a concept I had, and Viswanath made it into reality in short order, » Williams said. « Then Viswanath came up with the idea of embedding a camera, observing how the light interacts with the material, and updating the printing parameters based on his code. That’s what we want from our Ph.D. students: We provide a vision, and they accomplish that and grow beyond as an independent researcher. »

Meenakshisundaram and Scott discovered their final 3-D printed latex parts exhibited strong mechanical properties in a matrix known as a semi-interpenetrating polymer network, which hadn’t been documented for elastomeric latexes in the prior literature.

« An interpenetrating polymer network is like catching fish in a net, » Meenakshisundaram said. « The scaffold gives it a shape. Once you put that in the oven, the water will evaporate, and the tightly coiled polymer chains can relax, spread or flow, and interpenetrate into the net. »

The novel advances in both materials development and processing highlight the interdisciplinary environment fostered between the two groups.

Long and Williams both credited their counterpart’s expertise for making the collective breakthrough possible.

« My philosophy is these types of innovations are only achievable when you partner with people who are very different from you, » Long said.

The two professors said 3-D printed latex provides the conceptual framework for printing a range of unprecedented materials from rigid plastics to soft rubbers, which have been unprintable until now.

« When I was a graduate student working on this technology, we were excited to get unique performance from the shapes we could create, but the underlying assumption was we had to make do with very poor materials, » Williams said. « What’s been so exciting about this discovery with Tim’s group is being able to push the boundary of what we assumed was the limit of a printed material’s performance. »